A friend of mine introduced me to a new saying a little way back; “Fear is ego”. When I asked her to elaborate on what this meant, she explained it this way: “Do you know that immediate instinct to say “No!” when someone asks you to present something before an audience? Or how you look for excuses to decline when you’re asked to go outside of your comfort zone?” I had to admit that I recognized the feeling… She continued by saying that it’s not the presentation in itself that necessarily scares you, but what other people will think of it, or you!

The flipside of ambition is the fear of not succeeding, the fear of what other people think and the fear of failure. In other words, your ego feels threatened. In these situations, the fear is born because you’re afraid your ego might get bruised – alas “Fear is ego”!

If you were able to accept challenges like the ones mentioned above based solely on your possibility to grow (and take away all fear of failure) – would you choose differently?

An example of fear: A previous colleague of mine worked in a firm that merged with another company. The board decided that instead of choosing the new leader amongst the two existing leaders, they asked both to go through an extensive process with an external recruitment company to apply for the top position in the merged company.

My colleague decided against applying. Why? In his own words; “It’s better not to try, than to try and fail.” What influenced that decision? It was probably not his dream job, but was it likely that the fear of loosing face amongst his peers influenced him? I think so.

So, if we agree that fear easily limits us, we can deduce that to reach our full potential we must actively work against the fear. We must dare to not choose the comfortable approach, but the one that challenges us the most. Through the challenges and the conquering of your fears, you grow. It’s not accidental that if you go outside your comfort zone, you reach your growth zone. 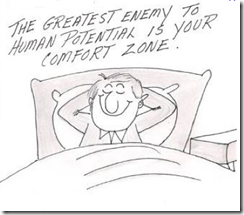 An example of victory over fear: Finally, I’ll end with a story about my 11 year old daughter. Her class runs 4 km every Monday in gym. Apparently it’s a big deal between the pupils how you rank. The fastest boys stand at the end of the course and comment on everyone. It feels easier not to compete, than to compete and get laughed at. One Sunday evening she was nervous and wondered if I could write a message to her teacher excusing her out of the gym class.

I told her about my friends saying, and explained that the only reason she was worried was that she put emphasis on what her fellow class mates think and say. I asked if she wanted to give them this much power, and to describe the worst that could happen if she gave it her all.

The next day my daughter was ecstatic, she was the fastest of the girls. I asked her if our talk had helped, she looked at me and pulled up the sleeve of her sweater. In thick black letters she had written “Fear is ego” on her arm.

My name is Camilla. My day (and sometimes evening) job is to be the managing director of SuperOffice Norway. This means I get to work with great people and the best products (not biased at all...). It means that my natural inclination to sell is put to good use; ideas to colleagues, solutions to customers and suggested changes to the CEO. The rest of the time is spent organizing my life as a 50%-fulltime-single mom to Matilde and Fanny, to save my cat Timian from fights, to believe I'm a rock star in The SuperLand Band and to think I'm still 25 years old as I hang and travel with friends. Oh, and one more thing; I've picked my life motto from a Metallica song "Forever trust in who you are".

3 out of 4 people have "glossophobia" = The fear of public speaking Next week will be fearless! ;-)

That's interesting :o) But I'm not just talking about public speaking, I'm talking about all the situations where we choose not to leave the comfort zone because it's, well, uncomfortable...