Feedback to the user comes in many forms.

The user interface responds to actions.

The system reacts and produces output. Feedback is used to engage and explain, and can improve user satisfaction.

Feedback can change a confusing experience to a pleasant experience that teaches you how the system works.

SuperOffice has a direct feedback on the moment-to-moment time scales. Little things like the navigator has a roll-over effect when the mouse pointer moves over it.

The iPhone is full of little delightful touches like the animation when you rotate the screen: the screen doesn’t just snap to the new orientation, it animates the rotation of the screen. The Android UI did not do this until the 4.1 version, so it did not provoke the same squee of joy when tilting the screen.

In other words, the feedback can help the user interface produce delight because the system reacted immediately, and the response exceeded our expectations in some way.

Immediacy is important. If the feedback comes even slightly after the pointer has moved, the user will notice. Research indicates that a delay of even a 100 milliseconds is noticeable and annoys the user.

Immediate feedback exposes the underlying cause-and-effect relationships so they are easy to learn. Push the button – get a new screen.

We need a way to indicate ongoing work since not everything can happen immediately. The traditional answer to this is a progress bar. As work is completed, the progress bar crawls towards 100% full.

In the beginning these were simple colored lines. These days they are animated with glows and highlights to make the 0 to 99% crawl a little more interesting.

The progress bar lets you know that you have been heard, the activity has started, but the result will not be ready for some time.

Many of the design principles we know from UI and UX design remain important when thinking about Service design. Feedback is an important part of Service design, just as it is important in User Interface design. When a customer contacts the reception, they want to be acknowledged (get feedback that their presence has been noted). When asking a question, the customer would like an answer quickly, rather than in the mail two weeks later.

Imagine a hotel lobby where the receptionist ignored customers for no obvious reason. You can easily imagine the Fawlty Towers-like exasperation and frustration that soon ensues. 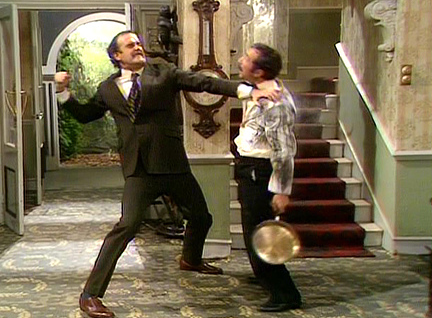 If you have sent out a marketing message to prospects, they will expect an acknowledgement of their response very quickly. Typically a mailing will ask prospects to register, and then salespeople will call them back later.

The prospect’s experience is this:

If you are using SuperOffice for Marketing, you can easily add links to the e-mail that trigger immediate responses back to the prospect. Your salespeople can then follow up the prospect later,  knowing that the first feedback has already been given.

The prospect’s experience of this is:

A service can also run for a long time. Typically a problem is reported to front line support, and it is then escalated within the organization until someone can handle it. Normally these escalations are hidden from the person who originally reported the problem. Exposing the fact that internal changes are happening gives the user feedback that the problem is not being ignored.

Feedback on this level is not as immediate as in the user-interface. It can take a day or two for a problem to be moved from one person to another. The person who reported the problem is waiting all the while.  Waiting is its own science, with its own look at the psychology of people waiting.

Providing feedback to the customer without providing an answer helps fill the time waiting. If the feedback is more detailed than “We are still working on your case #1234523” then we can also help explain the wait.

If we can tell the customer that 12 other people have reported the same problem this month, then we can help turn the wait into a group wait. Instead of being the only one with a problem, the customer is no longer alone.

As always, clear and interesting, keep up the good work!

great article! we do use two different services for getting feedback on UI we create. One is notableapp which is great for collaboration and gathering feedback from different team members, another one is FeedbackGuru.com, which provides feedback on actual UI. We have been using these two for long and they both are highly recommended.